For my second trip Down Under, I was lucky enough to check off another city on my Australia list: Brisbane!  Business trips can be long and stressful, but it certainly helps when you’re in a spectacular place with amazing people.

Oh yes, this blog post is quite late.  I have looked lovingly at these photos on my phone for months and meant to get around to posting but life of course got in the way.  I’m excited to finally sit down, reminisce, and share with you my very favorite city in Australia (so far!).

Off on another trip to Oz, I left IAD en route to Los Angeles on my favorite airplane, the 787 Dreamliner.  I had a long layover at LAX and the weather was spectacular so I stepped outside in the United lounge to have coffee in the warm LA afternoon.  Not too shabby for an airport view!

The flight to Sydney was long but comfortable.  One of the most incredible moments of the trip was seeing the sun rise 40,000 feet in the air as it peeked over the Australian continent just before landing. 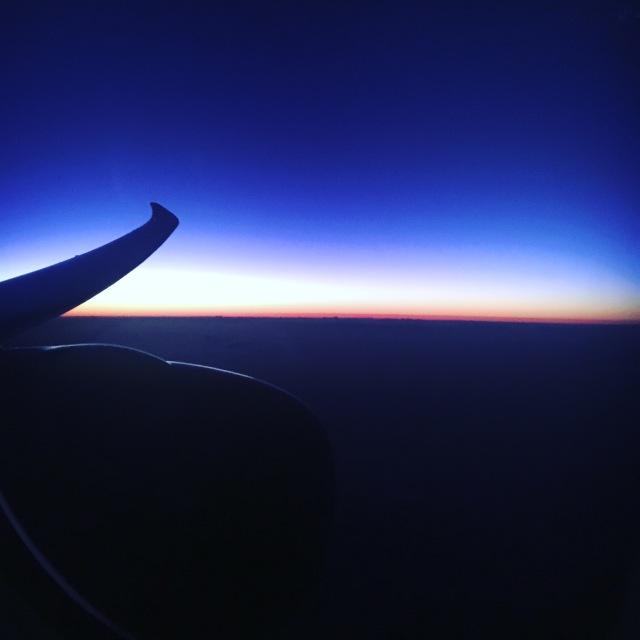 I hopped a quick flight to Canberra on a prop plane (which did wonder for my aviation fears) but it was incredibly quick and you could see the ground the entire way. 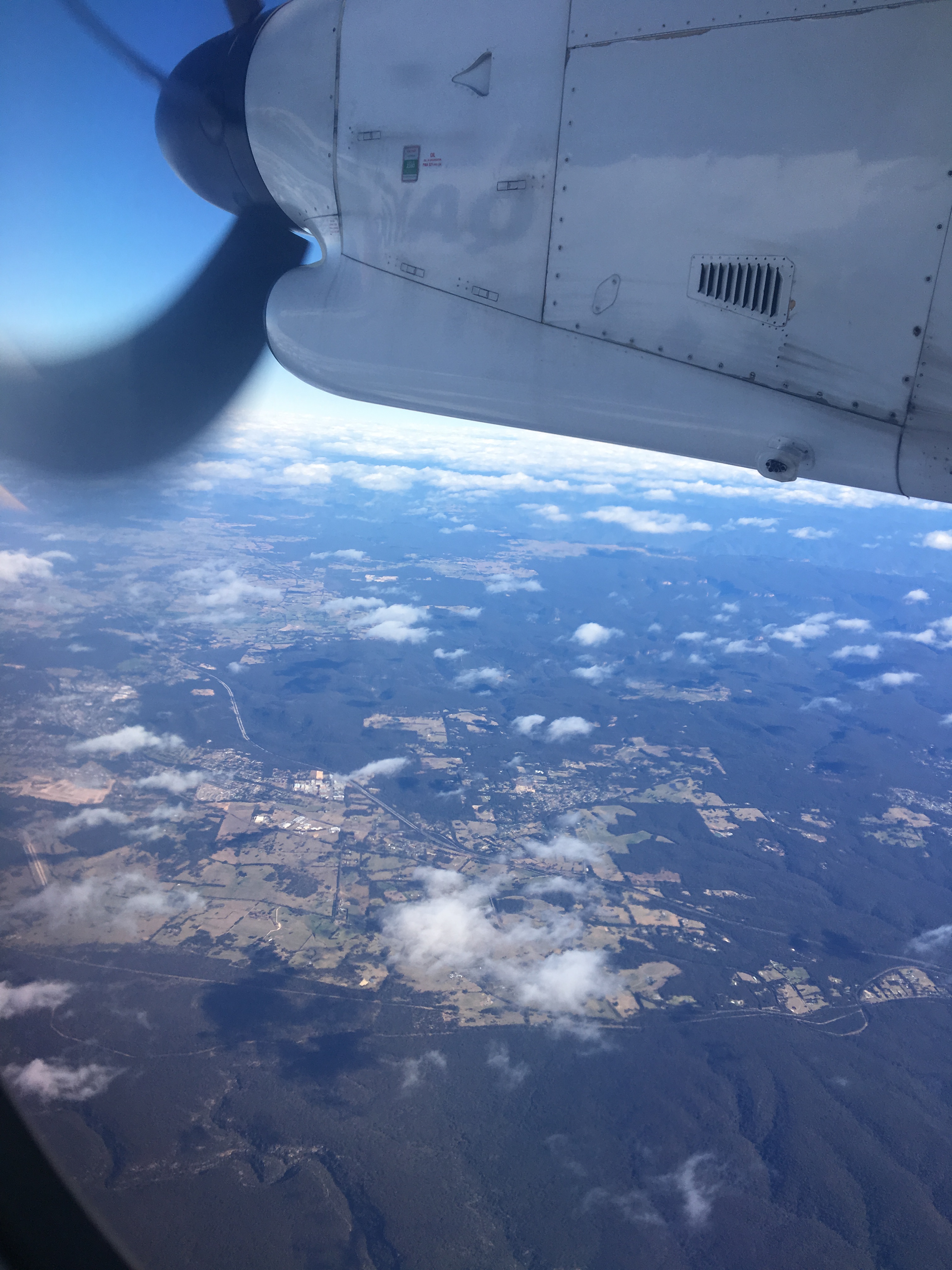 I took a short nap when I checked in to my hotel and met my coworker and his wife for dinner in Kingston Foreshore at an amazing contemporary Thai restaurant called Morks.  The food was incredible– pork belly buns, spare ribs, Thai fried rice… yum.

The weirdest part was the dessert.  I ordered a banana ice cream dish that had all sorts of honeycomb pieces, and Darcy ordered something with “fairy floss” (kind of like cotton candy).  It absolutely looked like a pile of HAIR and the texture was similar, but it melted in your mouth.  So weird!

Full and exhausted, I slept from 8PM until 6AM the next morning.

After a great day couple of days of training with my clients out about 30 minutes from the middle of Canberra, I was lucky enough to be driving home at dusk– or PRIME KANGAROO TIME.  Check out these babies in motion! 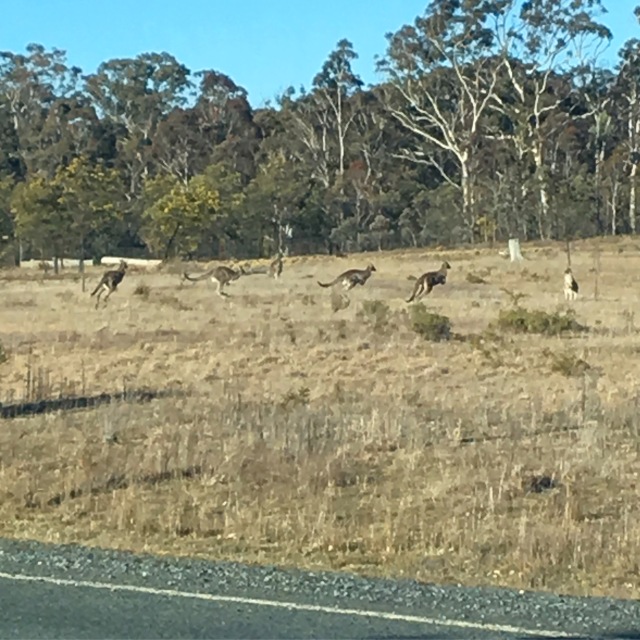 The drive back from the client site was really stunning.  Canberra is a beautiful city!

After work on Friday I hopped a flight to Brisbane where I was set to teach a course on Monday and Tuesday.  While waiting for my flight, I found my all time favorite food at the airport.  The caption says it all.  Nothing better!

I arrived in Brisbane around 10PM, grabbed an Uber, and found my hotel in the center of the CBD.  I was on the 25th floor and the views of the city, even close to midnight, were spectacular!

I went straight to sleep because I had to be up early for another all-day tour starting at 7AM the next morning.  Off to explore the city!

Bright and early the next morning I left my hotel and walked a few miles through the city to the Brisbane bus station where my tour was leaving from.  It was a slightly chilly morning but the sun was just starting to come up. I took some shots of the city on my walk: 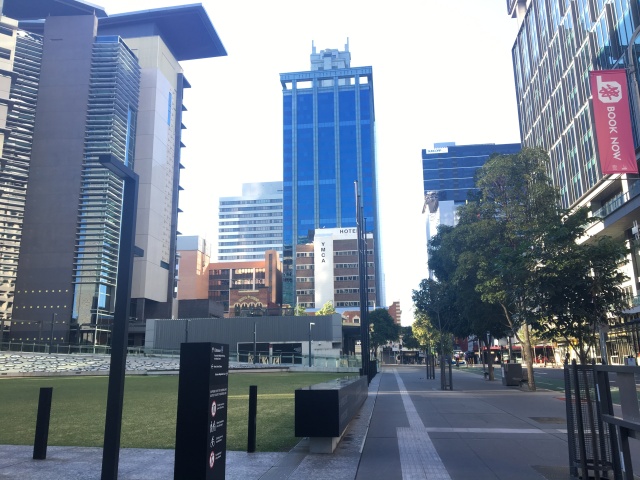 I even spotted the “bin chicken”, or Ibis, which is cute upon first glance but can eat its weight in rubbish and are all over Brisbane.  I loved the little guy :) 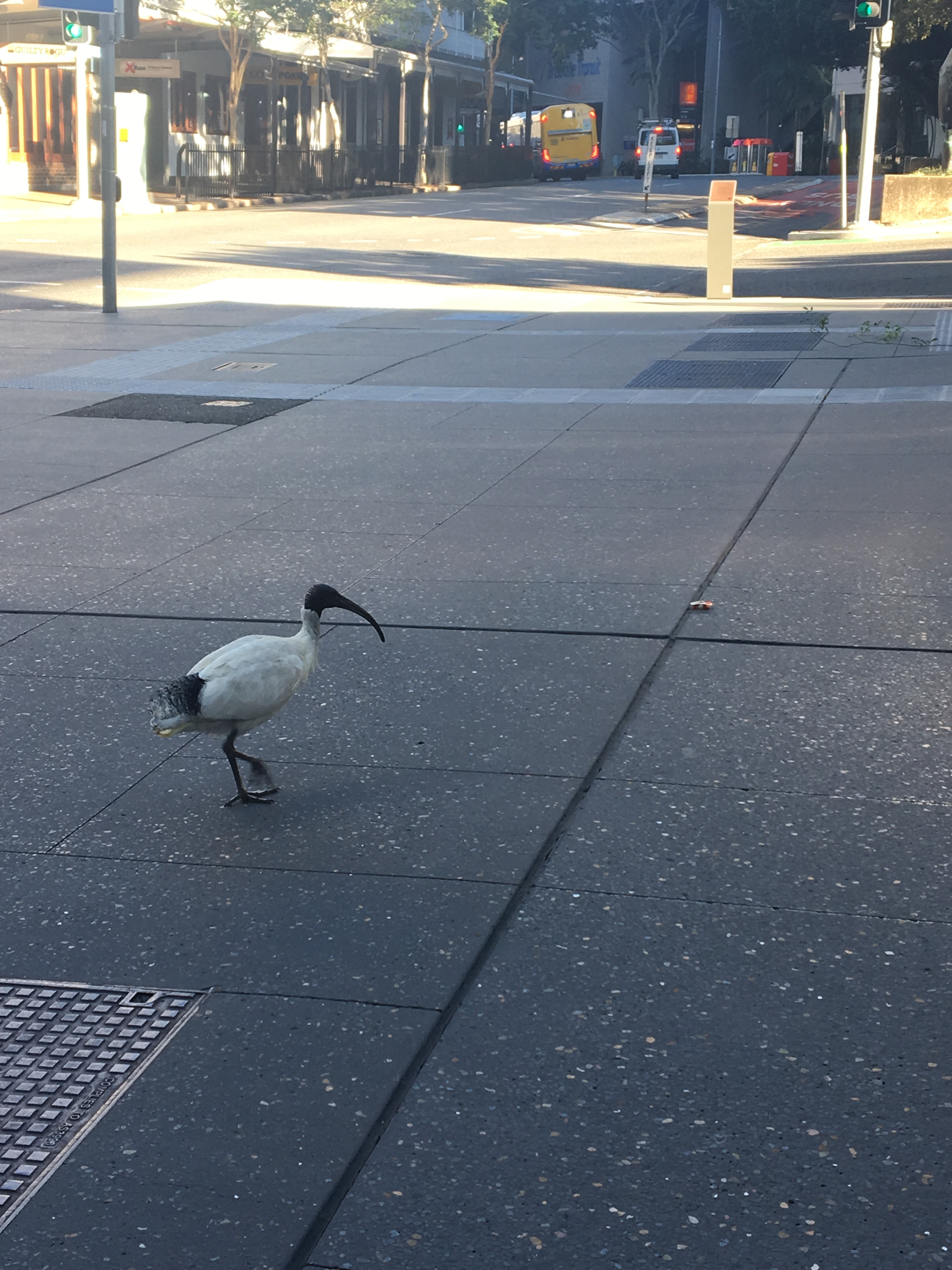 We boarded our tourbus, similar to the one I took in Sydney, and it was a small group of about 14 people.  We were on our way to Stradbroke Island for the day– an island that sits just off the coast of Brisbane.  We drove about an hour outside the city to Cleveland (haha) which is where the ferry left for Straddie.  It turned in to a really beautiful day!

We cruised on the ferry for about 40 minutes and enjoyed the blue waters with a flat white the whole way.  Once we got close, everyone climbed back in to the bus and we drove off the ship to explore!

Our guide was fun and friendly and took us first on a koala hike to his secret koala spot on the island.  He was tucked in the crook of a tree branch, and super cute!

The trail also led to a private inlet on the side of the island called Amity, with some of the most beautiful views I’d seen in all of Australia.  Just look at these colors!

We headed to our hiking spot up on a higher peak of Amity.  The trail was about 5km long but a leisurely path around some spectacular sites.  This was easily my favorite part of the entire day!

We started at the overlook to Main Beach on North Stradbroke Island.  One of the most popular beaches on the island, and its easy to see why!  Our guide stopped to take photos of each of us at this picturesque spot.

We continued around to a really cool spot on the North Gorge which had a blowhole.  You could hear the water and wind rushing in and out of the rocks and it created an amazing sound. 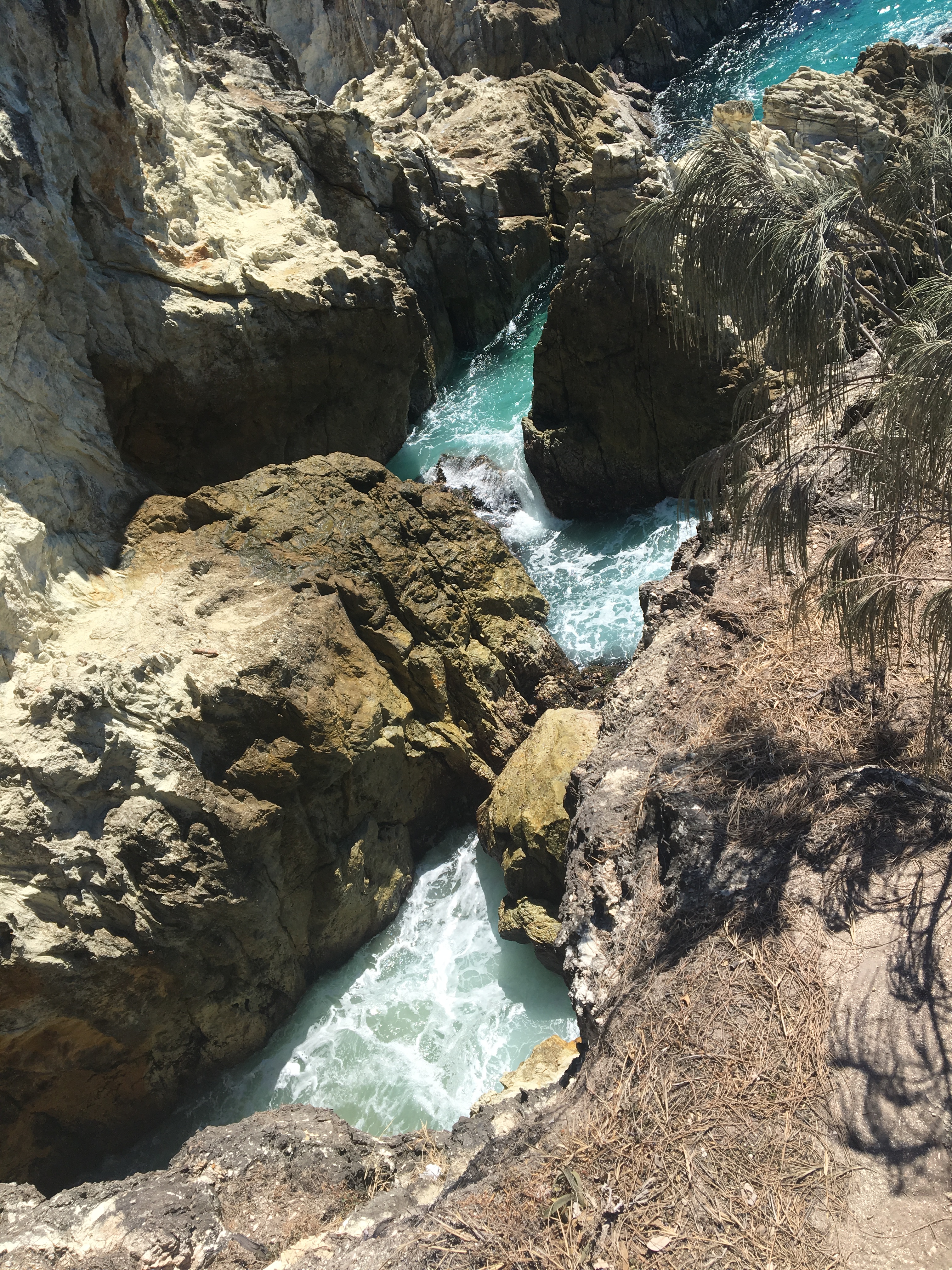 Farther down there was a beautiful gorge that had sapphire blue waters.  We walked around the perimeter of it and felt a warm breeze and ocean air.  I could have spent all day in this spot!

The end of the hike was unexpectedly full of wildlife.  A mama kangaroo holding a joey walked RIGHT in front of me!  Look at his little face in her pouch! 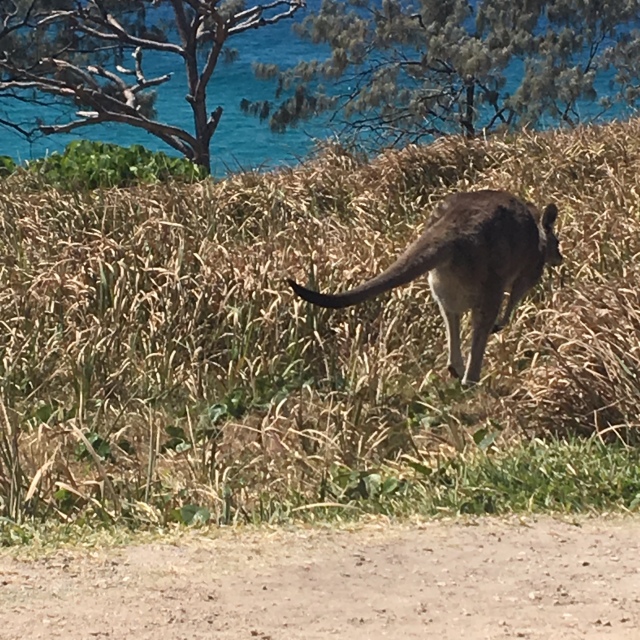 And just as I turned the corner, I got about three feet away from another beautiful roo!  Look at this baby:

After the hike we jumped in the van and headed to lunch at the Stradbroke Island Resort at Point Lookout.  It had a beautiful view of Shag Rock and we ate huge ceasar salads overlooking the beach.

By this time I had made friends with two AMAZING girls– a Swede traveling on business and a British au pair working in Sydney.  My, Charlotte, and I became fast friends and spend the next hour relaxing on the beach in the sunshine after lunch!

My and Charlotte braved the water and I caught the two goofing off in the waves! :)

Our last stop of the day was an incredible tea tree lake.  Tea trees have leaves full of oils that are very popular in lotions and soaps because of their skin soothing and softening properties.  This lake, called Brown Lake, literally looked like the water had been steeped with tea bags– and thats almost exactly what happened!  The trees surround the lake and their leaves dry up and fall off in to the water.  They “steep” in the lake leaving the water full of tea tree oil!  Look at the color of the water– its just a little brown like tea!  I snapped a shot when the water was nice and calm.

This photo (from this photographer) gives a great visual of the tea-colored water:

The water in the lake was quite chilly but our guide urged us to put our hands and feet in the water for a few minutes.  I dug mine into the sand and waited.  10 minutes later my hands and feet felt unbelievably smooth and soft.  It sure works!

Over the course of the day I had turned My and Charlotte on to the wonders of jumping pictures, so we decided to get one together at Brown Lake.  I love this shot and these women! 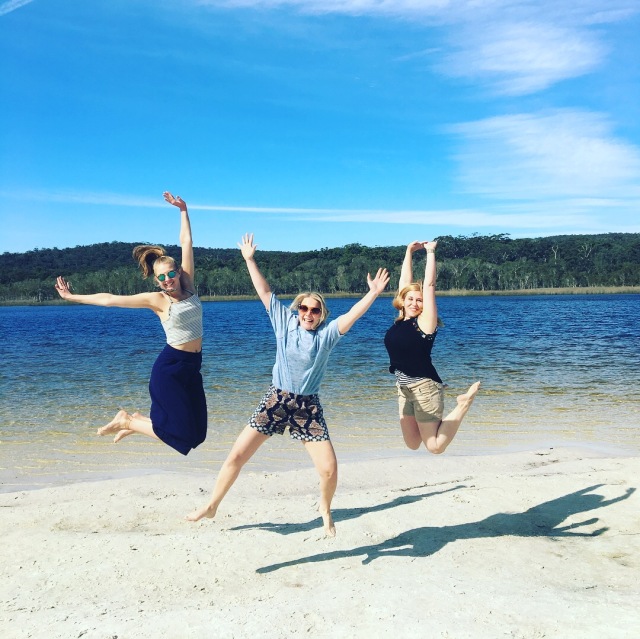 We got back to Brisbane around 7PM and all agreed that we wanted to meet up for dinner and drinks later in the evening.  Unfortunately, we were all zombies as soon as we hit our beds, so we rescheduled for the next day.  Sunday’s plans were to explore Southbank– after a much needed rest. :)